We begin in the backstage locker room area.  A door marked STORAGE opens and GIANT AZUMA comes out, sheepishly looking around and adjusting his mawashi.  He closes the door behind him and moves down the hall.

GIANT AZUMA (to himself, happily):  Bansai.

A minute later, the door opens again and FHANNA exits.  Her hair is mussed.  She attempts to fix it as she closes the door.  In a flash SKIVER is by her side.

SKIVER: He pay you?

FHANNA nods.  SKIVER holds out his hand.  FHANNA puts some credits in his palm, he instantly starts counting them.  He takes one and slips it back to FHANNA.  Satisfied he begins walking away.

SKIVER:  You’re only good if you earning.  So get earning.

FHANNA nods and follows SKIVER off.

We cut into the arena which is jam packed.  FALLER is in the ring and his opponent, AETHRAN OVERMASTER strides to the ring with THE LEVELER.

Aethran Overmaster d. Faller via pinfall after REGIN OF THE OVERMASTER – SQUASH – No offense form FALLER at all.  OVERMASTER threw him around like a toy.

NITRO:  Gentlemen, later today you will face BURNING HELL once again.  After defeating them previously in dominating victories, why are you fighting them instead of going after the GALAXIAN TAG TEAM CHAMPIONSHIP?

MOOG:  We care nothing of championships.  We will not rest until we injure Burning Man for not following orders.

SENTINEL: Yes, we will cripple him for his disobedience.

NITRO:  And what about Bishop Hell (II)?

MOOG:  We care nothing of him, but if he gets in our way, we will injure him too.

NITRO sends it back to the ring.

Scorn d. Taichi via pinfall after BURNING SCORN – SQUASH – One sided attack by SCORN.  The former champ seemed to miss a step the entire match, never hitting any moves.  Definitely out of character.

KILL PREY:  Goal one since returning has been to make MONOLITH my prize.  I have. At STORMFRONT I defeated him in a COSMIC CAGE.  Now, to put it simply, I’m bored with him.  So tonight, I’ll send him packing when I defeat him, easily and quickly, in our FEDERATION EXILE MATCH.  Monolith, when you return, if you return, you’ll be nothing more than a footnote in GWF history.

With those words we return to the ring.

CASTILEX d. BURNING HELL via pinfall when Sentinel covers Burning Man after NIGHTWATCH – SQUASH – MOOG and SENTINEL made their mission plainly earlier in the evening and the two of them did just that.  After the bell rang, CASTILEX looked to hit NIGHTWATCH again, but BISHOP HELL (II) pulled BURNING MAN from the ring and the two of them escaped through the crowd.  CASTILEX picked up the win but were thwarted in their attempts to injure BURNING MAN.

DARK MENACE heads to ringside with NOVA and he’s wearing a T-Shirt with a close up of, what appears to be PLETHADOR’s face!  NITRO can’t not ask him about it.

NITRO:  Dark Menace, I never pegged you as a Plethador fan. 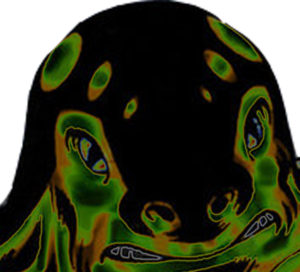 DARK MENACE:  Boy are you dumb.  This isn’t Plethador.  This is Pleple.  He’s the symbol of my new movement.  A new movement to wipe out idiots across the galaxy.  Eradicate them.  You see, for far too long, we’ve been told we have to accept everyone in the galaxy.  Even the idiots.  And, If you are smart like I am, there’s a stigma against you for not being inclusive of all the idiots.  Well, I’m starting a new movement and Pleple here is the symbol.  Our motto is, “It’s okay to be bright.”  We are no longer going to kowtow to the dumb and the stupid, for we are superior.  We look forward to the day where only smart people are left.  It’s okay to be bright!

And with that, confusing, rambling diatribe DARK MENACE heads to the ring with NOVA.  CATFIGHT was out next to huge cheers, accompanied by MONOLITH.

Catfight d. Nova via DQ when the ref catches Dark Menace trying to slip his cane to Nova during the match – * – After the match, MONOLITH got ahold of DARK MENACE and MENACE begged him off, but MONOLITH delivered a huge left fist, sending the manager out of the ring to the arena floor.  The CROWD loving every minute of it.

NITRO stops MONOLITH in the aisle.

NITRO:  Later on the program, it’s you versus Kill Prey in a NO DISQUALIFICATION, NO COUNTOUT FEDERATION EXILE MATCH.

MONOLITH looks down at NITRO, then just pushes past him and heads to the back.

FIST and PROBATION head to the ring with THE LEVELER.  They stand awaiting their opponents.  COVEN BLACK and COUNT NECROS head to the ring, with DARK MENACE on wobbly legs behind them.  He is still nursing the clobbering he took from MONOLITH.  This match is a big chance for VAMPIRE LEGENDS who have been floundering.

GLADIATORS d. VAMPIRE LEGENDS via DQ when the ref sees Count NECROS use Phantom Dust on Fist – * – This match was all in the VAMPIRES’ favor until they resorted to cheap tactics at the urging of DARK MENACE.  After the bell, all four men began to brawl until separated by security.

Fans across the galaxy were waiting breathlessly for this next match. KILL PREY came to the ring alone, accompanied only by boos from the CROWD.  MONOLITH came ringside to a standing ovation.  One of these men would be exiled for 10 cards!  They stood glaring at each other as the ref explained the rules.  The bell rang!

FEDERATION EXILE MATCH – 10 CARDS
NO DISQUALIFICATIONS – NO COUNTOUTS
Kill Prey d. Monolith via pinfall with Ambush – *** – KILL PREY rocks the galaxy by downing MONOLITH in short fashion and sends him packing for 10 cards!  The arena is stunned in silence as KILL PREY walks form the ring with a big smile on his face.  MONOLITH is slow to his feet and the realization kicks in.  Without a word, he heads to the back, walking past CATFIGHT who has come to console him.  MONOLITH IS EXILED FOR 10 CARDS.  This puts him way out of THE RECKONING!  Shock fans, shock!

The GALAXIAN TAG TEAM CHAMPIONS, SECURITY SQUAD (II), are out next with FHANNA leading the way.  She’s walking a little funny.  PREDATORS are out next to huge cheers from the crowd.  WOLF and LOPE have been dying to get their claws on the champs since their DQ win at STORMFRONT.

MAIN EVENT
NON-TITLE GALAXIAN TAG TEAM CHAMPIONSHIP
PREDATORS d. SECURITY SQUAD (II) via DQ when Overtime clobbers Lope with his helmet – * – PREDATORS are cheated out of victory once again by SECURITY SQUAD (II).  After the bell, CODE DESTROYER clobbered WOLF with his crowbar and helped OVERTIME attack LOPE!  The two men beat LOPE repeatedly, CODE DESTROYER with his crowbar, OVERTIME with his helmet!  The fans began throwing things at the two men who were undeterred!  ULTIMATE FIGHTERS and DEMON HUNTERS stormed the ring to chase the champs off.  LOPE was in a bad way and is definitely hurt.  LOPE INJURED 4 CARDS.