The atmosphere in the Arena is happy and light.  With last Thursday’s announcement that scientists have found a cure for the Black Death plague the mood is almost celebratory!  Those who had contracted the plague still suffer from, and some may have lasting effects depending on their state of mind and the length of time they were under the Black Death influence.  Some many never recover and before the matches start, there is a moment of silence for those lost.

The arena is full of color, something that had not happened at a GWF event in a long, long time.  Of course, there are still pockets of Black Death fans here and there.  Most feel these people are not threats or still possessed, probably just people who think it is ‘cool’ to like Black Death.  Commissioner Euritar just shrugged and said, “It takes all kinds and the fans are welcome to root for whomever they like.  As long as they like who they like willingly, free from a sickness.”

Remnants of Black Death still permeate the the GWF locker room, but they are all severely weakened, but their sway is far less than even the week before.  The Three have promised that they will reclaim their former glory but many scoff now that their is a cure.  Endgame still holds the GALAXIAN CHAMPIONSHIP but he will face stiff competition tonight from POWER FORCE’S Endgame.

Tauran d. Paralyze via DQ when Paralyze hit him with a Rylock Rod that was at ringside – DUD – This one was over in a flash.  The action spilled outside early on and Leveler handed Paralyze the Rylock Rod and Paralyze used it!

TITAN SAMURAI d. WARRIORS BORN via pinfall when Giant Azuma crushed Thraxx with ZENSHO – * – Tharkas, upset to be on a team that constantly loses, attacked Thraxx after the match and left him in the middle of the ring.

Paganax d. Bishop Hell via pinfall with BOW TO THE CHIEF – ** – Paganax does his part to stamp our Black Death by soundly beating Bishop Hell (II).

In a match Swarm demanded to seek retribution for his son’s sickness, Bex d. Swarm via submission with MORTAL MUTILATION – * – Swarm left frustrated.  Nitro caught up with him and asked him what his next plan of action is.  “Nitro, my friend, I don’t know, but I’ll tell you this, I will have revenge on The Three for everything they’ve put us through the past few years.  You can take that to the bank.”

In another of the ongoing matches between the two, Mistress of Darkness d. Nova via pinfall after COMPANION CONTROL – **** – Even with Black Death disappearing, the feud between these two is probably not over.

Sur d. Shayne via DQ when Shayne clobbered Sur with the cowbell on the end of the bullrope he brings to ringside – ***** – This was wild from top to bottom.  The only reason Sur won is that the ref had to finally stop the match after Shayne used his bull rope to choke out Sur.  The fans were thoroughly behind Shayne and loveed everything he did to The Three’s leader.

In a STREET SUICIDE MATCH, FEDERATION DEFENSE WATCHMEN d. MEAN STREETS via submission when PSI used MIND OVER MATTER on Skiver – SQUASH – The Watchmen made short work of Patch and Skiver and they never let the action go outside the ring.

In a CIRCINUS CELL MATCH, Ghena d. The Guardian via submission with GATES OF HELL – ** – Black Death gets a win in here and the crowd is not happy.  Ghena seems to care less, and is his way, simply walked back to the locker room and said nothing to anyone.

In a match for the INTERPLANETARY CHAMPIONSHIP, Zygon d. Overtime via submission with the HEAD TRI-CLAW – **** – Nexus even got involved in the match, trying to contract Dark Menace!  It was all for naught as Black Death retains the title here.  The crowd boos Zygon and Dark Menace loudly but both ignore and taunt them right back.

Promising to not allow Black Death to get the title in a match for the GALAXIAN TAG TEAM CHAMPIONSHIP, RUSH & TURMOIL d. BLACK DEATH REVOLUTION via pinfall when Rush hit Alpha Female with THE TEMPEST to retain the GALAXIAN TAG TEAM CHAMPIONSHIP – ***1/2 – Early on, Alpha Female was giving Turmoil fits, but the GLADIATORS, using quick tags, won the match!  The moment the bell rang, sirens began sounding in the arena.  Everyone was wondering what was happening.  Suddenly, Aethran soldiers led by Aethran Overmaster, swarmed into the arena and charged the ring.  Alpha Female was still knocked out because of THE TEMPEST and was apprehended.  Havoc, who hadn’t even tagged in, escaped through the audience.  Aethran Overmast looked frustrated, but seemed to relish capturing Alpha Female.

In the main event, for the GALAXIAN CHAMPIONSHIP, Harbinger d. Endgame via pinfall with REST IN PIECES – ***** – Harbinger stuns the galaxy by becoming the new GALAXIAN CHAMPION.  The Black Death fans that are left are in near riot mode and are being subdued by security!  The majority of the crowd cheers loudly for Harbinger who they come to see has put the final nail in the coffin of Black Death in the GWF!  Endgame is sitting in the corner, watching Harbinger hold the belt aloft.  Harbinger turns, sees Endgame and walks over and extends a hand.  Endgame regards this for a minute, then slides out of the ring under the bottom rope and walks away from the ring to a chorus of boos!

The broadcast was about to fade to black when, all of a sudden, SPLATTER (II), came charging from the back.  In one hand he had, ever present, Arsenal and in the other a long metallic piece of technology that looked like someone had glued wires and gizmos onto a long javelin.

Splatter hopped into the ring, ignoring Harbinger, and positioned himself in the center of it.  He looked at a holo-watch on his wrist and, after a few second, used both hands to jam the metallic object he was carrying into the dead center of the ring.  He then used Arsenal like a hammer and began pounding the object into he center of the ring.

Again, he looked at his wrist and then, after a pause, hit a large red button on the, now free standing, spear like object.  Instantly a ray of bright blue light shot up to the ceiling of the arena.  Whatever the beam was it created a large disc around the roof or the arena.  Once the circle engulfed the entire ceiling, the blue faded revealing SPACE!  People in the arena began freaking out as they realized that Splatter had opened some sort of transportation rift, right in the arena!  Splatter (II) kept looking at his watch and the beam.

Suddenly, a low rumble could be felt by those in the arena and surrounding areas and through the opening in the ceiling a spacecraft was seen descending directly down over the beam Splatter had set up in the middle of the ring.  Fans ran from the ring area as the ship came closer to the ground.  It was using its onboard hover jets to come in without engines not burn down the arena.  Holo-vision camera were rolling as the ship landed, crushing the ring as it did.  Splatter (II) who, had backed off backed off, now rang towards the ship as the hover jets ceased and began to cool.

The gangway ramp began to open with pops and hisses of steam and landed on the Krybarg announce table at ringside, smashing it completely.  The fans who hadn’t fled the building  stood in awe as ten figures began descending the ramp.

A collective, audible gasp was heard across the galaxy as the holo-visions showed the image of the ship’s occupants.  Splatter (II) grabbed a mic that someone has discarded in the chaos and said, simply… 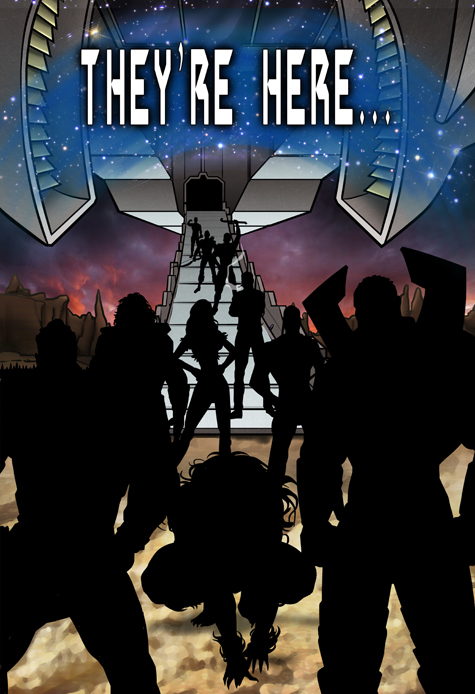