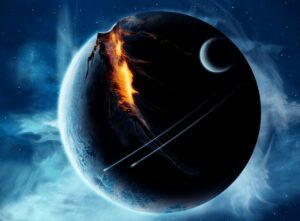 – GLADIATORS RECALLED TO AETHRA –
In a stunning development, all of the GLADIATORS have departed Deimos for Aethra, including GALAXIAN CHAMPION Aethran Overmaster.  Since their departure, diplomatic experts have noticed that all communications coming from the planet have ceased.  This has the galaxy on high alert.

WOLF: I’ve been battling the Aethrans for a long time. Something big is happening.

Long-time foes of the Aethrans, the Ani-Men of Andromeda, have convened a meeting of the secretive, Supreme Council of Andromeda.  What the purpose of this meeting is, is yet unknown.  Tensions are running high.

– KRALLA CHALLENGES ALL COMERS –
GWF WOMEN’S CHAMPION Kralla is usually not one for words but recently Nitro caught up with her and asked if she looked forward to defending the title in the new year.  Kralla’s reply was short and sweet.

KRALLA: There’s not a woman in the GWF who can beat me.

Her confidence is high but after her rookie year, she’s got some right to be cocky.

The CHAMELEON CREATURES’ Dark Menace didn’t even acknowledge the presence of the newly arrived Dark Menace! Action in the ring stopped as everyone was confused at this – – double vision!

The new Dark Menace pointed a finger at the one at ringside.

DARK MENACE: You are an imposter and I will not allow this charade to continue!

He reached for a device attached to his belt and pointed it at the lifeless Dark Menace! The CHAMELEON CREATURES rushed across the ring to try and prevent what was happening but it was too late!

The real Dark Menace teleported away.

Seizing on the opportunity, Patch covered Chameleon Creature Black Death and won the match for MEAN STREETS. But the victory was definitely overshadowed by the events the crowd had just witnessed.

SHAYNE: I saw the holo-vid of his return and he is a Hoss now.

Shayne took a big sip off his soda and looked directly into the camera.

SHAYNE: Buddy, I know you were primarily a tag team wrestler in the past but you have a standing invite to challenge for the INTERPLANETARY TITLE any time you want.

– GODSEND SENDS A MESSAGE FROM AN UNKNOWN LOCATION THAT HE WILL WIN THE WAR FOR CASTILEX! – ORGINS 2137 HANDBOOK PG. 21

– EVOLVED ASK THE NATIVES JOIN THEM –
Orrus and Tarval have asked THE NATIVES to join their cause in capturing the Basilisk.

ORRUS: Ygorr and Krud have spent time in the jungle with The Basilisk. They know him well and we can use that knowledge.

Hours later it was reported that THE NATIVES refused, saying they weren’t joining any teams in the near future.

ORRUS: These idiots have made a huge mistake turning down our offer to work with us!

– GODSEND DEMANDS MATCH WITH OVERMASTER –
After the brutal, and in Godsend’s opinion unprovoked, attack on Castilex by the Aethrans, Godsend is demanding a match against Aethran Overmaster on the first event of 2137!

AETHRAN OVERMASTER (smirking): My military genius has already defeated Godsend once, what is he a glutton for punishment?

The big man thought for a second.

AETHRAN OVERMASTER: Our military forces captured Castilex with ease. So let’s see how Godsend does against an Aethran Soldier.

As 2137 begins, we’ll keep you posted on all the goings on right here at GWFPromoter.com!