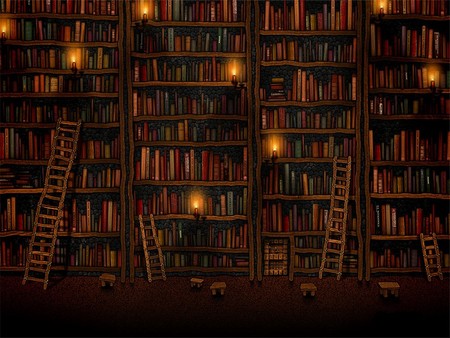 He watched as the old man tried several times to get the match to light.  In a moment of impatience, he flicked on the light on his communicator.

“Turn that off!” the old man rasped quickly.

He clicked the light off.  “Sorry.”

The old man coughed softly as he got the match to light and, using it, the candle.  “Synthetic light.  So very bad for the eyes.”

He waved out the match and set it, still smoking, on the candle’s base.  He rested for a beat and then turned to his visitor.  “Now,” the old man said, his breath shallow, “Show me this book.”

The old man’s visitor reached into the leather bag that hung at his hip.  He withdrew a leather bound journal.  The book was old, worn, like the man he was now handing it over to.  The old man reached for the book, using his second hand to steady the first.  He gently laid the journal down on the desk and undid the band keeping its cover closed.

As the old man began thumbing through the pages, the visitor looked around the room.  It was piled with books, scrolls, ancient writing.  All of it dancing in the light of the candle.  He turned back to the old man.

The old man was still.  Then he nodded.  “Yes.  This…” his hand gently brushed one of the open pages.  “This is real.”

A slow smile crept across the old man’s face as he turned to look at his visitor.  “The fire.  Yes.  It is real.”  Excitedly, the old man got up from his desk and stumbled towards a shelf across the room.

“Is it as the journal says?”

“What’s that?” the old man replied absentmindedly.  He was lost in his scanning of the shelves.

“Is it ‘foretold’ as the journal says.” the visitor said, scratching his head sheepishly.  “The fire, the good guys, saving the galaxy?”

The old man was coughing again, brought on by the dust he was kicking up.  He grabbed a pile of folded papers and turned back to his visitor.  “Life works in circles.  The things we are seeing today, uh, the Black Death, the visitors from other timelines.  It has all happened before.  But the fire.  The fire still burned throughout.  The fire is hope.  Hope that all will return to goodness.  That is the fire.”

“Not so lost as forgotten.”  The old man was now back at the table, laying out the papers he’d taken from the shelf.  “Times get good.  Hope recedes because when things are good people forget.  The fire still burns but it gets smaller because of neglect.  Then it must be found again.  Stoked.”

“But isn’t someone keeping the fire now?”

“No.  Times haven’t been this bad for centuries.  Whomever carried the fire before, the person who write this journal, is long gone.  But the fire is in a safe place, the keeper saw to it.  Now it restocked and before that, it must be found.”

“But found where?  The journal doesn’t say.”

“No,” the old man said, turning and shuffling through the papers he took from the shelf.  “No.  The keeper would not leave the exact where in the journal for fear the fire falls into the wrong hands.  If it were, hope might be snuffed out completely.”

“How will it be found again?”

The old man didn’t reply as he unfolded a paper in the pile.  “The map.”

The visitor looked down.  A star map was now unfolded on the table. It was weathered much like the journal.  “A map.”

“This map, along with the journal.  The two together will help you find the fire.”

“Yes.  The journal found you.  You are the new keeper.”

“I can’t be a keeper?  I don’t have what it takes to keep the fire of hope, let alone stock it so hope returns.”

The old man shrugged, then smiled, “What once was still is.”  He began refolding the map.  Then, reaching across the table, grabbed the journal and slipped the map within the pages.  “The task has fallen to you.  Only you can return the hope to the galaxy.”  He held out the journal towards his visitor.

The visitor looked at the old man silently.  Then he nodded and reached out and took the journal.

The old man waved his visitor away and sat back down at the table.  The visitor turned to leave.  Solaris leaned forward and blew out the candle.

The show opens with INTERPLANETARY CHAMPION and COMMISSIONER SLY DRURY standing in the ring.

SLY DRURY:  For months there’s been this fat jasper running around the GALAXY’S FINEST™ saying he ‘wants me’ and telling everyone else, ‘You’re not Drury.  You’re not Drury.’  It’s annoying and I apologize to everyone for his grating behavior.  He says he’s got evidence on me about something or another.  It’s all very weird and creepy.  Bottom line is, he’s crazy.  I bet if you asked Lord Nexus he’d agree.  But you know what?  I’m not afraid of this guy.  Witness, you want me?  You got me.  Tonight, in the main event.  It’s a non-title match but I have the feeling that that’s not what you’re after.  So tonight, see you in the ring.

The CROWD is pumped for this match.  Meanwhile we cut to the ring for our opener.

SHE DEVIL stands in the ring as her music plays and she’s suddenly joined by SHOOT and CLINCH who are doing their trademarked arm movements as they stomp about the ring.

Their opponents head to the ring, terrified.  It’s the NATIVES OF CASTILEX and they timidly climb into the ring.  SHOOT and CLINCH try and get the NATIVES to do their arm movements but the NATIVES look confused and shy away.  The CROWD loves this.  YGORR will start with CLINCH.  The bell rings.

MEAN STREETS is out and NITRO stops them in the aisle.

NITRO:  Gentlemen, it appears you seem to be on a bit of a slump.

PATCH:  Shut up you green retard!  (He grabs the mic away.)  We are MEAN STREETS.  We are here to win.  We gonna to head to the ring and any tag team out there that wants a piece of this, come get you some!

MEAN STREETS heads to the ring as the crowd wonders who will answer the call.  A second later BETTER THAN HUMAN head to the ring.

THARKAS:  You are human.  We are better than you.  You will kneel to us.  *hack p-tooey*

Pounding drums start and in a full sprint, Paganax heads to the ring!  He waves his flaming sword around as the CROWD cheers.  EURITAR has accompanied him.

The AETHRAN WAR ANTHEM plays and TURMOIL is out with THE LEVELER.  The CROWD is pumped for this match!

Paganax d. Turmoil via DQ when Turmoil smacks Paganax with the hilt of his own sword – ** – Great match until the finish!  The action spills outside and TURMOIL grabs PAGANAX’S sward and clobbers him with the hilt.  The two continue to brawl to the back after the bell.  This is a great new feud!

TITAN SAMURAI d. VAMIRE LEGENDS via submission when Kenji locks Coven Black in the KNEE BAR – *** – TITAN SAMURAI gets a win here, looking to jockey themselves into title contention.  VAMPIRE LEGENDS, on the other hand seem to be back to their losing ways.  The momentum we saw at THE RECKONING is long gone.  Perhaps DARK MENACE is too distracted with the election on the horizon to coach them properly.

EYDILON:  I want my demon.  I want Nosfera returned to me.  Whomever you are who stole him from me, show yourself and return my demon to me.

Suddenly the mysterious hooded figure appears and has a mic.

The figure gestures and from behind EYDILON appears NOSFERA and the ref rings the bell.

Nosfera d.Eydilon via pinball after THE DEMON BREATH – ****1/2 – NOSFERA, under the direction of the mysterious hooded figure, gets a win here, decimating EYDILON in the process.  After the bell, the hooded figure looks at EYDILON lying in the ring and then motions for NOSFERA to follow as he exits.  NOSFERA does without a single turn back to EYDILON.

WITNESS is now in the ring awaiting his opponent.  He’s hopping up and down, excited, as SLY DRURY makes his way to the ring with FHANNA for our MAIN EVENT!

MAIN EVENT
NON-TITLE INTERPLANETARY CHAMPIONSHIP MATCH
Sly Drury d. Witness via pinfall via REGIME CHANGE – * – This was more or less a squash match!  SLY DRURY ran over WITNESS like a truck and, it would seem, silenced him for good.

SLY DRURY soaks in the displeasure of the CROWD as we…