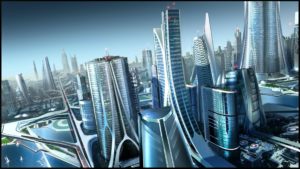 He took a deep breath as the cruiser pulled up in front of the building and slowed to a stop.  He slowly exhaled, willing his body to relax.  Then, relaxed as he’s going to be, he pressed the keypad and the door of the cruiser lifted open.  Suddenly, night turns to day as the lights of fifty plus cameras come on.  He is momentarily deafened by the cheers of the fans and the shouts of reporters.  He puts on his best smile and waves as he steps out of the car.  Security is there, surrounding him as he begins to walk inside.

As they walk one over-zealous fan breaks the security line, stylus and tablet in hand pleading for an autograph.  The fan is shut down by security and thrown back over the railing into the mob.  The sound of their screams fading as he steps inside the lobby.

His assistant approaches him.

“You have one quick interview before we go in.” she says, brushing the wall of black hair from in front of her face.

“No interviews.”  he says, the annoyance in his voice plainly obvious.

He looks at her and raises an eyebrow.  “Fine.”

She leads him to a small side room.  The moment he enters the reporter, an ANI-MAN, part ferret, stands.  “Thank you for your time.  I just have two question.”

“Right.  Uh, first, are you excited about tonight?”

“I could not be more excited or proud of what I’m about to show the Galaxy tonight.  What they are about to see reflects over a year of hard work.  I have lived in this world, working on this project for so long, I am ready for the rest of the galaxy to see it.  And I’ll say this, while projects that have soared to the tops of the charts in recent months have been nothing more than copied rehashes of things from the forgotten past, what you’re about to see is brand new.  A breath of fresh air in this tired old Galaxy.”

The reporter, typed a few notes into his table and then looked up, “Are you sad you’re missing Big Bang tonight?”

He smiled, took off his sunglasses and looked at the reporter.  “I gave the GALAXY’S FINEST™ the best of my life.  I made good friends, I battled honorable, and not so honorable enemies.  I was hated.  I was loved.  I was hated again.  And though I’m here tonight, fulfilling my true dream, there’s a small part of me that’s on Deimos tonight.”

The reporter made a few notes.  “Thank you.  Thank you.”

He nodded, patted the reporter on the shoulder and turned to his assistant.  “Let’s do this.”

She led the way into the main room.  A hush fell over the hundreds seated inside as he entered and took his seat.  The moment he was seated the lights dimmed and the screen in the front of the room flickered to life.

VOICE ON SCREEN:  We are the good guys, and we’re carrying the fire.

The crowd bursts into applause and he smiles as the rest of the opening credits roll.

Tickets have been sold out since January as every fan in the Galaxy has wanted to be in attendance for the event that is the pinnacle of modern day wrestling…BIG BANG!

The fans let out deafening jeers as SINFUL heads to the ring with DARK MENACE!  NITRO catches DARK MENACE at ringside.

NITRO:  Dark Menace, you have been uncharacteristically quiet since your unsuccessful bid for president of the United Federation of Stars and Planets.

DARK MENACE:  It’s true.  I was unsuccessful, something I’m not quite used to being.  But I’m also big enough to admit when I’ve made a mistake.  You see, I think my goal was too big.  Instead of trying to affect change on a Galaxy-wide level, I now know I should affect change on a local level.  That’s why, starting tonight and carrying on into 2133, you’re going to see a DARK MENACE FORCES that is refocused, revived and ready to take over the GALAXY’S FINEST™!

The CROWD boos loudly as DARK MENACE waves them off and heads to SINFUL’S corner.

SCORN is out with EURITAR and the fans are on their feet as the ref calls for the bell for the first match of BIG BANG!

Sinful d. Scorn via DQ when Scorn loses her temper and smashes Sinful with a steel chair – DUD – Fed up with SINFUL and DARK MENACE’S rule-breaking ways from the moment the bell rang, SCORN lashes out with a steel chair to the side of SINFUL’S face!  The ref calls for a DQ but the fans are on their feet cheering for SCORN!

Disciple of Terror d. Overtime via KO – **** – DISCIPLE OF TERROR puts a nail in the coffin of the GWFZ/FTR feud with a decisive victory that puts OVERTIME down for the count!  After the bell, LORD NEXUS appears along with PERFECT SPECIMEN and FALLER and they pick up OVERTIME’S limp body and take him to the back.

MEAN STREETS d. TITAN SAMURAI when patch clobbers Giant Azuma with PATCH WORK – * – PATCH and SKIVER work better together than we’ve ever seen them and they look to prove a point as they clobber KENJI and put the boots to GIANT AZUMA after the bell!  Refs are finally able to pull them off the big man but he is injured.

He will have his work cut out for him as THE LEVELER leads his opponent TURMOIL to the ring!

Burning Man d. Turmoil via DQ when Turmoil hits his opponent with Table Breaker – *1/2 – Good back and forth, but TURMOIL just can’t seem to play by the rules and despite the ref’s warnings, he drives BURNING MAN through a table at ringside!  After the bell the two brawl wildly as the mysterious hooded figure and THE LEVELER look on.

THE IMMORTALS d. BETTER THAN HUMAN via DQ when Oracle storms the ring to break up a pinfall – *** – SUR and BEX dominate here and were a second away from willing when ORACLE storms the ring and smashes SUR with his glass orb!  The four men continued to battle after the bell as the crowd egged them on!

Aethran Overmaster d. Paganax via pinfall with REIGN OF THE OVERMASTER – SQUASH – AETHRAN OVERMASTER completely runs over PAGANAX, who seemed to have winded himself rushing to the ring so quickly.  OVERMASTER loops the chain around PAGANAX’S chest and lifts his lifeless opponent up to a sitting position as he stands above him victorious, defiant to the booing of the crowd.

Monolith d. Ghena via pinfall after CATASTROPHE – * – MONOLITH wastes no time in completely destroying GHENA, putting a quick end to their feud that began at BETRAYAL.

Elina d. Taichi via pinfall with RESURRECTION – **** – A fantastic match by two of the top competitors in the WOMEN’S division!  TAICHI came close to claiming victory, but ELINA fights hard and ends 2132 as the GWF WOMEN’S CHAMPION!

Panther Warrior d. Sly Drury via pinfall after SPEED OF THE PANTHER – *** – PANTHER WARRIOR brings a swift end to SLY DRURY’S impressive 24 card reign and is the new INTERPLANETARY CHAMPION! SLY DRURY is furious and immediately fires the ref for what he calls a slow count (it wasn’t).  REGIME CHANGE has lost one of its three championships!  Is this an omen of what’s to come?

PREDATORS d. SECURITY SQUAD via DQ when Fhanna charges into the ring to break up a pinfall – **** – A wild and brutal match between these four rule-benders but it was interference by FHANNA, desperate to keep the titles on SECURITY SQUAD that caused the disqualification.  SECURITY SQUAD are still the GALAXIAN TAG TEAM CHAMPIONS.

The crowd is on their feet as the mysterious hooded figure appears leading NOSFERA to the ring!  The demon is actually getting some cheers from the crowd who is eager to see SHAYNE toppled!

The lone dobro plays and SHAYNE steps into the arena with FHANNA trailing behind.  SHAYNE is focused as he stares directly at NOSFERA as he climbs into the ring.

Shayne d. Nosfera via DQ  when Nosfera slams Shayne into the metal barricade against the ref’s warnings – **1/2 – In the final moments, the action spilled outside of the ring and the mysterious hooded figure gave NOSFERA some sort of signal.  NOSFERA immediately obeyed and picked SHAYNE up by the legs and spun him around and slammed him into the guardrails!  The ref called the match, but NOSFERA ignored the bell and continued to attack SHAYNE!

mysterious hooded figure:  this poor creature is the forsaken.  for years he has battled in the galaxy’s finest™ and for years he has been ignored.  passed from team to team with no one to truly guide him.  his power.  he is a former champion yet he is an afterthought every year.

Suddenly there is a great column of fire and BURNING MAN stands in the ring next to NOSFERA.  He picks up SHAYNE and hits him with EXHAUSTION.

mysterious hooded figure:  this man is forsaken.  no one gives him due.  until he begins winning.  people take notice, but even then, his appearance prevents them from getting too close.  he is forsaken.  but burning man and nosfera are forsaken no more.  both have proved this year that they should not be forgotten, taken lightly, forsaken.  we are not some new group.  some new faction bent on ‘taking over the galaxy’s finest™.’  after tonight the three of us go our separate ways.  but you now know what the three of us are capable of.  and the three of us should never again be…

The mysterious hooded figure reaches up and pulls back the hood.