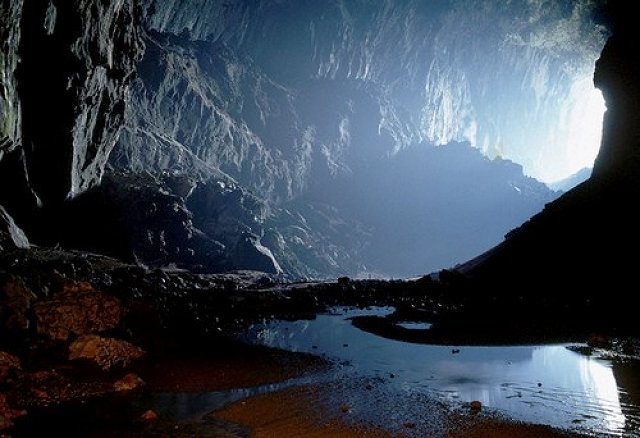 The figure taps at the screen of his wrist computer and a hovering drone lights up next to him, illuminating the ground.  He turns his head and as he does, the light on the drone follows his gaze.  Confident that it works, he taps a few more buttons and there’s a small beep.

FIGURE:  Day 14 on Groombridge 34. (He grunts as he steps over a large rock in his continued travel into the cave.)  I am close.  This is the final cave in the area that the map directed me to.  If the galaxy is going to be saved, I need to find the fire.

The figure taps a few buttons on the screen.

He is now so deep into the cave, any light from outside is now gone.  The hovering drone’s light steady, but small.  He comes to a branch in the cave where the tunnel splits.  He looks down each tunnel, the drone’s light following.  He reaches down into the bag he has slung over his shoulder and pulls out the leather bound journal.  He thumbs through pages and settles on one.  He holds it up and looks at the page, the drone focusing it’s light on the centuries old scrawling on the page.

FIGURE (reading):  The breath of the beast will lead the way to the fire.

He closes the journal and looks down each of the passages again.  He shakes his head, the drone light comically following.  There is silence as he thinks.

He quickly looks around the cave.  At the cave split, two long roots, belonging to a long dead tree that was growing above ground, hang from the ceiling.  He begins studying them closely.  The drone focuses its light at the bottoms of the roots.  They appear to be completely still but the more he focuses, the more he can see, they are moving slightly.  The air in the cave is deadly still, but the tips of the roots are moving just a little.  He reaches out a hand and grabs the drone and it instantly shuts off.  He holds the light on the roots and holds his breath.  He wants to be sure nothing he is doing is causing the movement he sees in the roots.

The roots are moving to the left.

FIGURE:  The breath of the beast will lead the way to the fire.  It’s to the right.

He tosses the drone into the air over his shoulder and it instantly kicks on, steadies itself and focuses its light.  He traverses the tunnel.  It is long and, in some places, the tunnel closes to only about four foot high and he has trouble getting his body through.

It takes awhile to realize that the wind that was blowing the roots back at the split, is now stronger and he can feel it.  He smiles, it does feel like a creature breathing, but it is surely a vent further down the cave that is letting air from outside in.

He realizes that the tunnel is becoming less and less rocky and, looking ahead, he is astonished to see that the walls are becoming…carved.  Three meters later, he is standing on a smoothed floor with walls and a ceiling above him.

Four meters later, an altar carved out of the stone wall behind it.  On the altar, a small leather pouch.  He gasps.  Carefully he steps forward towards the altar.  He looks down at the pouch, the drone light follows.  He carefully reaches out and picks it up.

A smile crosses his masked face.  A surge of energy pulses through his body as his fist closes around the pouch.  He turns to make his way back out.  As the smooth, carved floor give way to the rocks of the cave he realizes that the wind down in this room is even stronger.  He turns looking to see if he can see this vent as it might be an easier way to the surface that traveling the almost mile back through the cave.

The drone’s light scans the ceiling as he searches for any opening.  Finding none, he looks back at the altar and for the first time realizes that the stone altar is not carved out of the wall behind it.  In fact, there isn’t a wall behind it.  He also realizes that the wind is not coming from any opening to the surface.  He realizes that it truly is ‘the breath of the beast’ as the Cyromarmaron stands to it’s full height and, looking at the figure lets out a bellow that shakes the walls.

The figure wastes no time in running.  Fast.  Fast across the smooth floor and then as fast as possible across the rocky floor of the cave.

The light of the drone flashing wildly as the Cyromarmaron’s heavy foot steps pounded the ground in pursuit.  The beast is heavy and slow but can maneuver the cave’s terrain better than he can.  He gains a little ground on the beast when he reaches the smaller passages, but the best smashes through them.

Running, legs cut from the sharp edges of the rocks, the figure blows by where the tunnel split and that’s when he realizes the cave is beginning to collapse with the pounding of the beast’s feet.

He charges ahead and scales a larger boulder when he feels the tongue of the Cyromarmaron circle his left foot.  He pulls hard and breaks free, scrambling over the rock.

He looks back as the beast’s massive foot appears of over the top of the boulder and the rock crushes under his immense weight.  A mistake as the boulder was supporting the wall.  Several tons of rock begins falling on the beast and it bellows in pain as it begins to get crushed by the falling rocks.

The figure doesn’t wait to see what happens next, just gets to his feet and runs.  Around him, the walls all begin to falter and he runs faster, the leather pouch in pulsing in his hand.

Seconds later he can see the cave entrance 50 yards in front of him.  He doubles his speed as rocks crash to the ground around him.  A rock falls and hits his shoulder, causing him to drop the leather pouch.

He reacts down for it and as his hand is a foot away, the ceiling collapses, burying him in rubble.

It is time for THE RECKONING!  This is the Galaxy’s premiere wrestling event!  Running since year one of the GALAXY’S FINEST™, THE RECKONING is totally impossible to compare with other events as there is nothing else like it!  It also signals the mid-year point in this already crazy year!  THE RECKONING is the one time of year where every single wrestler on the roster has a title shot.  All they have to do is win.

Spread out over four nights, each RANKING GAUNTLET will focus on one division of the GWF..  Tonight the focus is on the women of the GALAXY’S FINEST™ and FHANNA will defend her GWF WOMEN’S CHAMPIONSHIP here tonight!  But we have a ways to go before we find who FHANNA’S challenger is.

DARK MENACE is here leading NOVA and SINFUL to the ring.  He is, of course, campaigning but he’s also distractedly reading a bunch of index cards he’s holding.  No doubt these are notes for his big debate against his opponent CLIN-TRON 3000.  After his wrestlers are in the ring, he returns to the back to let them fight one on one.

COMMISSIONER DRURY has followed past tradition and announced that all these matches will be TITAN DEATH MATCHES so there is a clear winner in each one.  The bell rings and we are off.

2132 RANKING GAUNTLET
TITAN DEATH MATCH
Sinful (6) d. Nova (10) via pinfall after a roll through on a death jump – ***** – These two women tore each other apart.  This was a heck of a match!  One of the best women’s matches we’ve seen all year!  SINFUL gets the win but will she have anything left for her next opponent?

DARK MENACE is back out at ringside for the next match and CATFIGHT comes out to huge cheers.  Still no word on MAGGIE, her tiger, but the fans throw their support behind her whole-heartedly.  She waves to them as she climbs into the ring and SINFUL attacks before the bell!

2132 RANKING GAUNTLET
TITAN DEATH MATCH
Sinful (6) d. Catfight (7) via pinfall with FELINE FURY – **1/2 – Whoa!  Did SINFUL just win using CATFIGHT’S MOVE?!  The GALAXY’S FINEST™ has never seen anything like that before!  There is a stunned silence as SINFUL watches CATFIGHT slide out of the ring.  SINFUL looks like she can barley stand.

The silence turns to cheers as ELINA heads to the ring with EURITAR running behind her.  ELINA saw the sneak attack SINFUL pulled on CATFIGHT and is ready to fight.  The bell rings.

2132 RANKING GAUNTLET
TITAN DEATH MATCH
Elina (1) d. Sinful (9) via pinfall after a fireman’s carry gutbuster – * – SINFUL fought hard but after the two previous matches she had little defense left with which to fend off ELINA who advances.

SCORN is out next and EURITAR recuses himself from ringside to let the two women fight.  SCORN and ELINA shake hands as the bell rings.

2132 RANKING GAUNTLET
TITAN DEATH MATCH
Scorn (8) d. Elina (5) via pinfall with BURNING SCORN – ***** – Another amazing FIVE STAR match!  These two put on a clinic.  SCORN took the brunt of the damage but was able to pull out the win at the last minute.  After the match, the two women hug and ELINA leaves.

TAICHI, who has been the WOMEN’S RECKONING MVP for the past two years straight, is out to cheers.  LORD NEXUS accompanies her.  EURITAR returns to ringside and all four individuals shake hands as the bell rings.

2132 RANKING GAUNTLET
TITAN DEATH MATCH
Taichi (1) d. Scorn (9) via pinfall after a Muay Thai Kick – SQUASH – Whoa!  One move, a kick and it is over!  TAICHI must have seen a weakness in SCORN and went for the big win!  After the bell, TAICHI helped SCORN up and made sure she was okay and got off safely with EURITAR.

SHE DEVIL is out doing the crazy arm movements her and THE ULTIMATE FIGHTERS are known for!  This fans are excited as this would appear to be another great match-up.  The bell rings!

2132 RANKING GAUNTLET
TITAN DEATH MATCH
Taichi (6) d. She Devil (6) via submission with the ARM TRIANGLE – ***** – ANOTHER FIVE STAR MATCH!  The fans are on their feet with a standing ovation for both ladies!  The two women shake hands after the bell and TAICHI is on her way to a title match!

DRURY:  First of all yappy dog, I don’t need to ever explain myself to the likes of you.  It should be obvious, I’m here to accompany my little girl here to the ring and watch her retain her GWF WOMEN’S CHAMPIONSHIP.  Ain’t that right baby?

FHANNA kisses DRURY on the cheek as NITRO looks on disgusted.  FHANNA steps into the ring and the ref calls for the bell.

MAIN EVENT
GWF WOMEN’S CHAMPIONSHIP
TITAN DEATH MATCH
Taichi (6) d. Fhanna (7) via submission with the ARM TRIANGLE – ***1/2 – In the final moments, TAICHI locked in the ARM TRIANGLE and DRURY stormed the ring to break it up!  He was met by a clothesline from LORD NEXUS much to the cheering of the crowd and FHANNA tapped out quickly after!  TAICHI is the NEW GWF WOMEN’S CHAMPION and, for the third year in a row, THE RECKONING MVP of the night having one three matches! TAICHI and LORD NEXUS celebrate and DRURY fumes in the background as we…